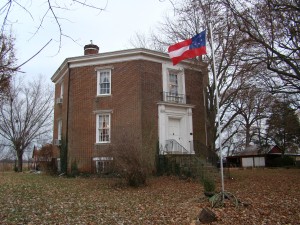 First you will hear Monique Sears, co-founder of Volunteer State Paranormal Research, say “OK”, then immediately after you will hear a series of what sounds like five footsteps. To me they sound like boots on hardwood, and seem to be echoing and walking around us in the room.

This capture is from our public investigation at Octagon Hall Museum on September 18, 2011. It was our first session of the night, we were upstairs in Mary Elizabeth’s room. The people in attendance were Volunteer State Paranormal Research team members Monique, Richard and Becki with guests Rebecca and Scott. The footsteps were caught on my Olympus Digital Recorder WS-100. Everyone was sitting down, and there were no other groups inside the house at the time.

I thought this paticular capture was really cool for a several reasons. First off, we were all sitting down and even the guests were doing a great job of tagging–so we know it was not any of us. Secondly, there were no other groups inside the house at the time. This means that nobody could be walking around. Also, we all heard the noise with our “naked” ears–but to us it just sounded like random tapping on the floor. It wasn’t until later listening with the recording that it sounds like echoing footsteps, possibly a boot, walking in a circular pattern around the room.

Upon hearing this capture, Billy Byrd (owner of Octagon Hall Museum) wrote this: “You finally got a recording of the steps that I and numerous others have heard dozens of times. but never captured. I usually hear them when I’m alone and quiet.”