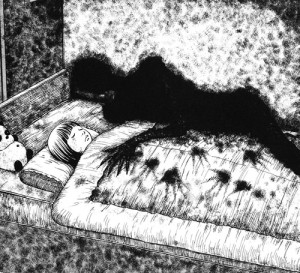 I just woke up. I feel the sweat beading up on my forehead. I am terrified. I know I am awake. I can’t move. The room is freezing. I don’t know exactly what time it is, but it must be somewhere between midnight and dawn. It is still dark.

I try to lift my head. I feel myself straining to lift it, but my head just doesn’t move. I open my mouth to scream, nothing comes out. A silent scream… just like in a nightmare… But I am awake – I know I am awake!

I try to sit up, to move my arms or legs. Nothing moves. I am consumed with utter terror. I am awake, this is not a dream. I know I am awake.

There is a heavy pressure on my chest, like somebody is sitting on me. I feel a presence, mean, evil, dirty. Was it Satan? A demon? I wasn’t sure. I wince inside, thinking that I am probably going to get hurt really, really bad. I am still consumed with terror. Again I try to scream. My mouth opens, but again nothing comes out.

I still feel the pressure on my chest, but it somehow spreads to my legs and feet. It felt as if someone has spread out full length on top of me for the sole purpose of pinning me down, so that I cannot move. The pressure increases, like there is the weight of two on top of me instead of just one. I strain to breath because of the pressure bearing down on my chest and lungs. The force has become greater. I feel tears trickling down the sides of my face. Time ceased. Had it been seconds or hours? I’ll never know. It seemed like forever to me.

Then it was finally gone.

I was in my early teens. The experience was in my childhood home, in my own bed.

Was it a dream? No, I knew I was awake… because the tears I had felt trickling down my face during the episode were still there when it was over… and I never experienced a transition of “waking up”… proof that it was not my imagination or a dream. It was REAL, and I WAS awake the entire time.

Many people experience episodes such as this, and it has been recently coined “Old Hag Syndrome”.

What is “Old Hag Syndrome”?

The medical community explains Old Hag Syndrome as simply being sleep paralysis. Sleep paralysis is normal and happens every night during the REM stage of sleep. This is a natural protective function of the body that prevents people from acting out their dreams during their sleep and is called REM atonia.

Occasionally, something physically malfunctions and people wake up still in the state of REM atonia. When this occurs, it is common for the victim to experience horrific hallucinations such as demons, witches, aliens, rapists, intruders, etc. in the room with them. The hallucinations are very real and the person suffering the hallucination may be spoken to, threatened and touched… all while being paralyzed and unable to speak. The experiences of many people who have claimed to be abducted by aliens in their home have been attributed to sleep paralysis and the hallucinations it creates. The medical community is unsure exactly how or why the hallucinations and apparitions occur, and according to Stanford Sleep & Dreams, this remains one of the biggest mysteries in dream research.

“Old Hag” or sleep paralysis is a common phenomenon and described by almost all cultures of the world. Some consider it alien abduction, others the devil and his minions, others demons, or the one commonly used in the United States – the “old hag” who sits on the sleeping victim’s chest rendering him unable to move upon waking. This is often said to be a sign of an upcoming tragedy or event. “The witch riding your back” is the term used by African Culture. In Hmong culture the translation is “crushing demon”, “held down by shadow” in Vietnamese, “ghost pressing on body” in Chinese, “goblin or succubus” in Iceland, and similar translations from all around the world. The victim is paralyzed, unable to move or speak, and experiences various phenomena.

Many believe that these experiences are actually paranormal phenomena occurring, and not a hallucination.

So Exactly What Happened to Me?

I am still trying to figure this out. There is a little more to the story…

I never really told anybody about the experience when it happened because I was embarrassed, feeling that I let down my family and my church community. You see, beforehand I had been playing with an Ouija board… and it appeared as though I was getting answers. It was all fun and game until that night time episode. Then I was absolutely positive that God was punishing me in some way for “dabbling in witchcraft” and playing with the Ouija board. Maybe my punishment was demon visitation… or maybe God had just abandoned me for a while, and the demons crept in. My young, teenage mind struggled to sort through what happened and why. I was sure nobody would understand so I just kept it to myself and sought out as much information I could on God and demons. I never did run across anything about “Old Hag Syndrome” at that time, but did find many, many religious stories relating to demons.

So did I “open a portal” with the Ouija board? I couldn’t say for sure, but I don’t think so. I have never had another experience even similar to this.

Could it have been paranormal activity? Maybe. Several years later my brother had a similar experience in the same house. Also, as young children (much prior to my “Old Hag” experience) my brother and I had both seen a similar-looking apparitions in the house. Although they are skeptical about the paranormal, my parents have both recently told me of unusual things they have experienced – hearing strange breathing and seeing a white mist — things that would have frightened some people and have caused them to want to investigate.

Was The Experience a Sleep Malfunction or Paranormal Activity?

I guess I will never know for sure. I have no witness, no documentation. What I experienced could easily be explained by either. The medical community can’t fully explain how or why the apparitions occur. Could this be because they really are paranormal? Or is it just some chemical malfunction in the brain that has yet to be discovered. Who knows!

The search for answers to questions like this is the reason why paranormal and psychic research are so important!

We are only at the tip of the iceberg as far as reality is concerned. Science is an ongoing process, facts being updated daily as new theories are developed and proven.

It could be that the spirit world is much closer and more accessible than most of us can imagine. Maybe “hauntings” are not a rare occurrence, but a mere instance of us nearsighted humans getting a glimpse of what is going around us all the time.

This is why I investigate.